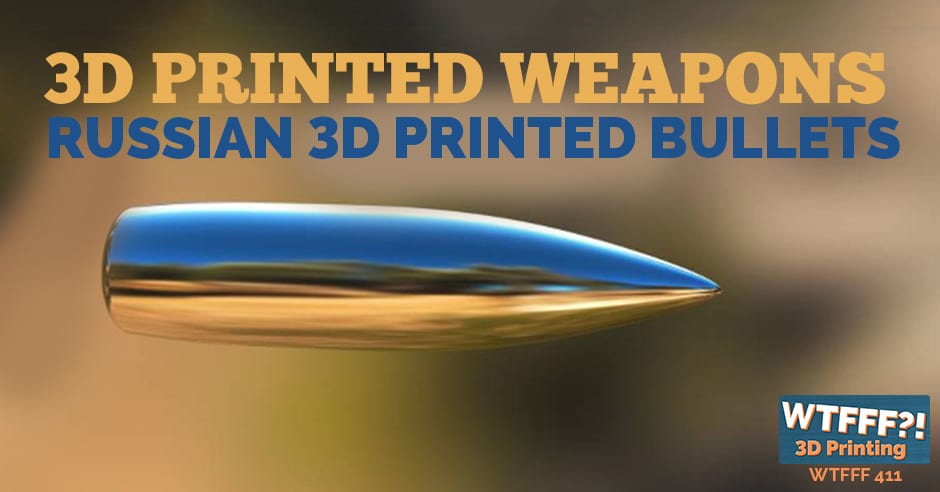 With the emergence of a 3D printed gun, it comes as no surprise that testing has been done on the creation and use of 3D printed bullets. Tom and Tracy Hazzard question what this means and could mean for warfare, safety issues, and users that choose to print these items at home?

We’ve done one episode I think in the past where we really treaded into the 3D print weapons category. Today, we’re going to really talk about Russian hacking, we’re talking about Russian hacking of 3D printed bullets. That’s a weapon, really. That’s a weapon, whether you’re talking about digital hacking as a weapon or 3D print bullets. There has been some advanced research studies done in Russia on 3D printed bullets. In this case, they’re using laser melting.

They’re using a metal 3D printing process but still layer by layer, fusing metal powder into a bullet. They’ve been doing this testing to prove that it can be done. Now, not only is our government and among other people are going to have concerns about people 3D printing guns, but you figured, they’ve been printing the guns. They just aren’t buying their ammunition from standard places. Now, we’ve got to be concerned about what are the crazy new bullets that people may be printing.

Sure you can create 3D printed bullets – but why?

In this particular case, bullets have been an art in the past. They were hand melted at times in our history in colonial times. It doesn’t seem like all that far from that to be looking at a laser centered. Only if you’re going to be doing stuff that is like shooting someone and putting smart technology into their body in the process, what are you accomplishing with this is my question. It seems like an extremely inefficient way to make bullets.

That does beg the question, why would you want to? Is there some kind of a geometry of a bullet that is illegal that you might want to print on your own? Then you’re just doing something illegal anyway. The real mystery to me when I read the story about 3D printed bullets is, let’s say, you 3D print a bullet, what are you going to put it in, a musket and hand-pack the gun powder? Because there’s this whole part of ammunition that is the brass or copper material casing. The gun powder goes in there and the bullet is formed in there so that, the way most guns work, the firing pin hits the back of the bullet and explodes the gun powder and it fires the bullet off. What are you going to do? People are packing their own bullets and gun powder now? Nobody packs their own cigarettes really anymore for some materials.

I think we just got a bunch of people who are aficionados who just are upset now, maybe. Seriously, my point is, it’s a lot more work and another manufacturing challenge to not only print a bullet, but print a casing and then to pack it with the right amount of gun powder and all this. Why would you do it?

Even if it has all the same characteristics, yeah, it begs the question, why? Are you in the middle of nowhere and you don’t have anything but you’re going to lug around a gigantic metal 3D printer with you? That doesn’t make sense either. No, you’re not going to do that. You’d print enough that you need in the privacy of wherever it is you’re going to do it and take them with you.

That comes to bullets being regulated, which they’re not regulated as far as I understand in Russia. Why would they care about that? Unless they plan to flood the market here or in other countries that have a regulated bullet market.

Ammunition is regulated. You have to go to certain places to buy it. You only have to have a license to buy a gun. You don’t have to have a license to buy ammunition. I was talking about in Russia, though, where it isn’t. But how are they going to flood our market unless it’s illegally? That is what we’re saying. Unless you plan to have bullets that have gone through the black market or something like that, unregulated bullets never been manufactured by a manufacturer that’s audited, whatever the case may be in terms of how it works.

I guess I’d admittedly don’t know enough about weapons and ammunition to know why you’d really want to do this. Certainly, the things that we’re able to read on this study didn’t really delve into those motivations. No, just that it’s equivalent. They found that they were able to produce bullets that were accurately made enough and perform similarly. That’s it.

I don’t know. I keep thinking about this all the time. It’s like, we see so many of these things and I just step back and go, “Why?” Just because we can doesn’t mean we should. Why? Is there a reason that I’m not seeing here? Maybe it’s because I’m just not a gun person, I’m not seeing something and that maybe the case. Which is why someone who doesn’t know an industry well shouldn’t be designing for it.

Guns can be considered as art, and 3D printing heirloom gun reproductions for decor or museum purposes seems like a solid idea.

You know what, I think it’s actually different with the idea of 3D printed guns than it is with ammunition, 3D printed bullets. I think it’s a very different thing. Whether you believe in guns or not, or you like them or not, that’s really irrelevant for this conversation. I’m not trying to make a political statement in any way about this. If you like guns as an object and you collect guns and you have an appreciation for whether it’s the engineering or the art of them, if you can call it that, the reality is, I could see somebody maybe who is interested wanting to 3D print a gun to create their own design.

Because traditional manufacturing of a gun would be, just like prototyping anything, it’s a lot more expensive to go and tool for something and make a real gun. You could 3D print your own on your own machines if you want to. Bespoke heirloom guns. Hey, I think that it could be a thing. All I can think about is the horror when my grandfather passed away and my family discovered that he had a World War II gun in his possession all these years and no one knew it. The horror that that was in the house and no one knew it, that was the part about it that was so scary. There you go, an heirloom. Actually, I don’t think that’s an all too uncommon story for that generation of people in this world, all over the world, not just Americans.

You can understand why somebody who’s intending to commit a crime and may want to make a gun that wouldn’t set off metal detectors might want to make a 3D printed gun out of plastic. There’s that whole motivation and the government’s been cracking down on that. That’s not supposed to happen anyway. I think we can’t deny, it probably can and does happen. This whole idea of creating a unique feature for your gun by 3D printing it or your own design, you certainly could.

The ammunition, the bullets themselves, the ammunition, I don’t understand why you would want to at all. What’s the benefit? I don’t know if there’s some sort of functional benefit. I can only think of illegal benefits. I can’t think of a hunter going out there and wanting to waste the time, don’t you want to get out there and hunt? Why do you want to waste the time doing that?

Unless, now thinking back to some other episodes we did about 3D printed medications where you could 3D print a structure of a pill that has air gaps inside of it that would allow it to dissolve quicker in your body when you swallow that medicine. I wonder if there’s something to printing bullets that have negative spaces, empty hallow chambers within it when they have impact, would they cause more damage or explode more or something, I don’t know. Maybe there is something to that. Again, that’s nefarious.

I don’t know anything about that to know, but as we’re talking and thinking more about this, I’m trying to think what might the motivations be. It certainly isn’t going to be to make bullets faster, certainly isn’t going to be to make them easier to obtain because again, the gun powder and the casings and all that. There’s just so much work to it. It’s a lot of work. I don’t know. Didn’t make a whole lot of sense to me.

Maybe you guys have some insight out there. We’d love to hear from you and hear your thoughts on this in the comments below, or you can ping us on Facebook at 3D Start Point.