How did White Clouds 3D print your way to a Super Bowl Ad? It started with an injury to Thomas Davis who is a linebacker on the Carolina Panthers. He broke his arm in the NFC Championship game, had surgery the next day, and had a whole bunch of screws put in the bone of his arm to hold it together. Theoretically, he can play, but he will probably be in quite a bit of pain even though it was about two weeks ago. It’s still not healed yet; that takes a while. But the Panthers needed the guy to play, but they needed a protective brace, and they needed it yesterday. Their question was, how can we get a custom brace made overnight?

There actually is Super Bowl 3D, but this one does not require you to wear special glasses. Thomas Davis had a 3D printed brace made by WhiteClouds, whose CEO, Jerry Ropelato, I talked to at CES. He was an interesting guy with a fascinating company that has so many capabilities. I didn’t realize that they are the biggest 3D printing service bureau facility out there. They have 53 employees and hundreds of machines with different capabilities and different materials available, which is why they were able to print the brace with a hard core and a rubbery material on the surface.

How did they do it so fast? This really isn’t a design project. It’s more of an engineering project. Let’s be clear. It’s all function, not form. They tried to make it look cool because you can, but it’s not about aesthetics. It’s all about the function.

They hastily took a 3D scan of his forearm, which I don’t understand because 3D scans are so easy to do. Was the scan crappy? They wanted this brace yesterday so he could start practicing with it and get used to it. They should have had plenty of scans of his bones. Maybe they just needed a surface scan of his muscle formation. So they did that and got it to WhiteClouds. 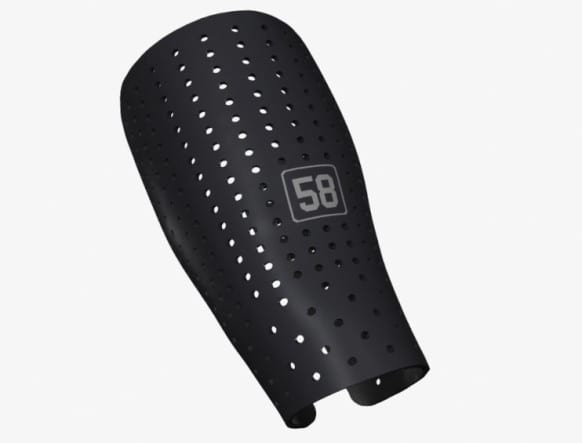 They essentially made a shell for his forearm with some holes in it so it would breathe. Then they coated it with some softer, rubbery material. The core material of the 3D print was strong enough. They have all kinds of materials at their disposal, so they picked one that was strong enough to do the job, to be a brace around his arm.

The real interesting part will be to see if the brace really held up during the Super Bowl. You don’t have time to stress-test it, and that is part of the engineering iteration process that you take. In this case, based on your understanding of your core materials and the process by which you made it, you have to hope that it works. But we both know that sometimes once it’s in action it won’t work.

They say that Thomas Davis banged it on a bunch of tables and did stuff to try to break it. And it didn’t happen yet. But you don’t know what it’s like when you have adrenaline rushing. In certain situations, it will be different.

We always talk about how important it is to iterate in the process of making anything 3D printed, whether it’s using design or not. They said in this article that they didn’t have time to iterate because it was a complicated enough print to begin with, so it was going to take many hours to print. You don’t have double the amount of time to do that. So they just had to take some risks and hope it works out.

Kudos to WhiteClouds because how do you get a bigger Super Bowl ad than that? Seriously, they are going to get all kinds of recognition. They were smart enough to put their logo on it. Good job, guys. I love that they put #58 on it, too, which is Thomas Davis’s number. Why not?

Gosh, they say this thing took a full 30 hours to print. Your tie takes 20, so that’s common. No, that doesn’t surprise me, but I think that’s a significant print regardless. This is a big man who probably has a pretty big forearm. I guess they are saying there is no guarantee that Davis will play, but this is giving him his best shot at it. I hope he does because that would be a great testament to it.

I know you weren’t all that excited about the Super Bowl because your team did not make it, so we now have to watch it anyway because 3D is in it. We better go to my dad’s and watch it on the gigantic TV. If I must.

Before we close, should we make a Super Bowl prediction, which will be a post-prediction? I would probably pick Carolina to win it because… Because you’re pissed at Denver for beating your Patriots? No, it’s not even that. I think Carolina has more going for them even though Denver has a great defense. Sorry, folks, if you’re not football people. Manning just seems to pull rabbits out of hats, and so did his brother the two times the Giants beat the Patriots, which just killed me. They shouldn’t win, and they end up winning.

It is what it is. By the time this airs, everyone will know the results anyway. We will see if we were right on Monday.

It’s a very timely thing and speaks a lot to the wonderful things the 3D print industry is doing and what the capabilities are and the fast turnaround time. We talk a lot about these projects of the prosthetic hands, and they take a much longer amount of time to execute and print properly. This organization jumped through some hoops. But they did have enough manpower to throw at it. You need to crunch in 100 hours to do something, so you can put five guys on it and take a long day. You can do that. They definitely jumped through some hoops to respond quickly. I’m glad they did it; they should have.

The NFL can afford it, so I hope they charged a premium to drop everything and do it. Either that, or they just got a good Super Bowl ad. But it’s a lot of good press and certainly Wired and other people wrote on it. Good for WhiteClouds. Happy to see that.