Take a look into how it’s possible to  3D print your own braces with different kind of take on Tech Tuesday. Today we are not just giving you advice and tips on how to use your 3D printer, but we are highlighting a case study of a project that a college student did, which is highly technical within the 3D printing world and is really cool.

3D Print Your Own Braces

Amos Dudley is an awesome kid. He is in college in New Jersey in the town where there is a real big installment of 3D printers throughout the school system, but he is not attending one of those schools. Through 3D printing and other techniques, he created an orthodontic device to shift his teeth. Really he created his braces, similar to what the Invisalign people create.

It’s a fun story. He had the traditional braces and a retainer, and he didn’t wear his retainer as well as he should have, which I can relate to. I did the same thing when I was a teenager, and I now have this nice little gap between my two front teeth. He had a more unsightly tooth that moved out, and he wanted to fix it. He realized he had all of these tools at his disposal at his college: he had a lab and access to 3D printers—a Stratasys FFF machine—and scanning equipment. 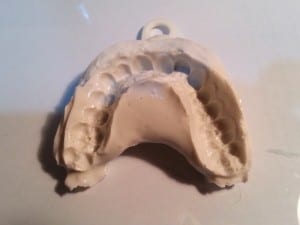 First he made a permastone, which is an alginate powder impression. He made a tray to do that in to get a better picture of what his teeth looked like right at that moment. You could see the overlapping.

Then what he did was he cast in a traditional material the positive. He made an impression of his teeth, which was the negative. Then he molded it in material that was going to produce a good quality positive, essentially a duplicate, of this teeth and gums.

He then scanned it to create a 3D model in the computer. He looked up freely available information online about what the maximum distance you should move a tooth in a stage of any manipulation with braces, and using the computer with that model he made from

Laser scan of the mold. Image via amosdudley.com

scanning the positive of his teeth, he manipulated the one tooth in this case that he wanted to move. He figured out that it needs to move this far over sixteen weeks, divided it up amongst the different stages, and moved that tooth that maximum amount it should move little by little.

He answers in his post, “What does one need to do this themselves?” He had to have knowledge of orthodontic movement, which is all over the Internet; a 3D scanner; a mold of his teeth; CAD software; a high-res 3D printer; retainer material because you want to put the right material in your mouth; and a vacuum-forming machine. He 3D printed each of those different things he vacuum-formed over to move that tooth and with that safe material to put on your teeth. Each one had a different model that was then vacuum-formed over; there were multiples throughout the process.

You have to have dimensional accuracy with a 3D printer, so you have to have the right printer for that, which is something he talks about carefully. He thought a Formlabs would have been ideal, but he didn’t have access to one, so he had to use what he had. He used a Stratasys Dimension 1200es, but the dimensional accuracy of that is 100-micron print, which a lot of desktop 3D printers are capable of today. There are some that are better; he is right in that the Formlabs could have been better. It worked, so that’s just fine.

He made it work. He was able to move his teeth in sixteen weeks and $60 of cost to him. He is lucky that he had access to all the equipment at the school because he is paying tuition to go there. But I am really impressed.

This kid really thought, Yeah, why can’t I make my own braces? Why should my parents have to pay thousands of dollars all over again to fix my mistake of not wearing my retainer? And he turned it into a project. He is getting a lot of press for this. It has been written up all over the media. DIY orthodonture.

I can relate to that. When our twenty-one-year-old daughter was sixteen, she had this one tooth that was a baby tooth, and she refused to get it pulled. She would not get it pulled. We could only go so far with fixing her teeth because of it, and it had an impact. Her adult tooth was growing in underneath it, but the baby tooth wouldn’t fall out. She had these two teeth on top of each other. How much can you fix your teeth when one is having such a negative impact? But she wouldn’t have it pulled.

It was at the stage where I gave up. I didn’t fight it, and we didn’t have a ton of money at the time. I couldn’t afford the expenses of braces, and I wasn’t going to do it if she wouldn’t get that tooth pulled because it won’t be effective. So we made a choice. She may one day be unhappy about her teeth, just like Amos is unhappy that he didn’t wear his retainer. She may be unhappy that she didn’t get her tooth pulled. These are things that happen. These are choices you make as a parent and choices you make as a teenager either to follow the rules or not. I don’t think our daughter could fix her teeth with 3D printing necessarily. Probably not. We’d have to pull the tooth out.

The reality is that I really applaud the ambition. No one told him he couldn’t or shouldn’t do it. He made a project out of it, researched it, and did it. Good for him. This kid has initiative, and if he is applying for a job at my place, I’d hire him just because of that kind of drive alone.

This is why this is so critical to talk about on a Tech Tuesday. Sometimes the skills you need to do a project require you to dive into them. This is something we have learned very strongly in our business. If you don’t get into the factory, if you don’t put your hands on them and only computer-model them, you can’t really understand how innovative you can be, how far you can push your tech. You can’t do it from a distance. He dove in, and now he has experience of all kinds of equipment and processing and tools. He learned how to apply that in a process to achieve a goal.

Imagine how his brain is going to work now. He has a process he can go through to think things through now. He legitimately did this. There are Before and After pictures of his teeth after the sixteen-week period. It’s incredible.

One other thing I want to talk about is the computer modeling from a technical perspective. He took a scan of the positive of his teeth that he made, and that came into the computer software. He wasn’t too thrilled with the interface of the software he used, but it worked. He ended up taking that shell that the scan made and created another full solid model of that tooth he could manipulate separately from the rest of the scan and moved that tooth. One thing he said was that it did really manipulate his gums. He didn’t make a model and change that when he moved the tooth, and that might have been a little inaccurate in the modeling, but the gums are soft and move.

From a practical perspective, it was the teeth that the braces needed to act on; the gums were just going to go with the flow. He had to think about a lot of the practical, technical aspects of model-making, manipulating that model, and the resulting realities of the vacuum-form he was making and how that was going to affect other parts around the tooth. Think about all of that from a technical perspective.

Think about it from the standpoint of a college kid who had no money. He had $60 of materials. Why can’t you just go and have impressions made? Orthodontists and dentists can do impressions for relatively inexpensive amounts. You could skip a whole part of the process. I’m glad he didn’t because he learned a lot from it, but there are also inexpensive ways to do those types of things as well. There are a lot of options out there to people who have skills in these areas that aren’t expensive.

If your project is something that has this many different components and features to it—it’s not a learning project for you, it’s a business project—you might want to consider finding the right resources for some of these things. I think you can still find them inexpensively enough and still learn something from the process.

Maybe so. I don’t know how many orthodontists are going to be happy with making impressions for you to take home and do your own project at home. They are in the business of making money doing the braces thing. They may refuse. You would be surprised. If someone said, “Hey, I think you’re too costly, but I will take those impressions I paid for,” maybe. You paid for them, so you’d be surprised.

As we have been recording this, we got more details. He is a student at the New Jersey Institute of Technology and lives in Montclair, New Jersey. Montclair is the town that has made the news for having 3D printers installed in K-12 and in their community colleges. It’s not his school, but that area of the country seems to be a real hotbed for 3D print education and realization. Great going, Montclair, NJ. 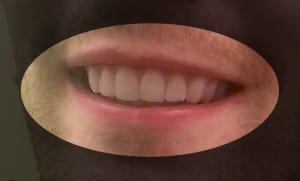 If you have any cool tech-related projects for us to check out and even talk about on a future Tech Tuesday, send them our way.