Society has long held a fear of their newfangled technologies spying on them and reporting back on everything they do. While in most cases these fears are unfounded, a researcher from the University of California at Irvine, Mohammad Al Faruque, has found that your 3D printer may violate your intellectual property. Tom and Tracy Hazzard discuss the findings of Al Faruque, and how this could affect your 3D printing practices going forward. According to Al Faruque, audio recordings of 3D printers printing objects could possibly be reverse-engineered to recreate trademarked designs with high accuracy. Let Tom and Tracy show you how you can keep yourself protected from any possible security risks associated with your 3D printer.

Our good friend and mentor, Dr. James Wise, a former professor who is always into the latest science magazines and knows we are into 3D printing, told us about this article that talked about 3D print spying and how printers can be vulnerable to this. This is fascinating, and even though it may seem a little far-fetched to some of you – it’s legit. It’s a different Tech Tuesday subject that I’m totally into.

The guy who figured this out is a researcher at the University of California, Irvine – which is actually in our backyard, Mohammad al Faruque, he’s a researcher in the emerging field of cyber physical systems. What he found through his research is that if you record the sound waves, the audio, not talking about hacking the computer or hacking the code, but just if you make an audio recording of an FFF 3D printer as it is making an object. All the parts of a 3D printer like the stepper motors, they all have very unique sounds, if you record those in action that sound can be reverse engineered for someone to then program another 3D printer from the audio waves to reproduce that 3D object. They are talking about it being a vulnerability in terms of theft of somebody’s intellectual property. Industrial espionage.

To me, I get it, and 3D print spying absolutely seems possible, but I don’t know why you would want to. That’s still the question in the back of my mind. Maybe you’re at the level of those braces or something, but even then the data is different for each set of teeth so it doesn’t make any sense, and those are printed using SLA technology so that audio wouldn’t even work anyway.

The researchers at UC Irvine did some examples and they’ve proved it out. They are saying that all the hums, beeps and legitimate sounds 3D printers make (and I’ll get to the illegitimate sounds in a minute), but they’ve tested the accuracy and done it. They’ve found that on more complex objects, the easier it was to reproduce than simple shapes like a cube, sphere, or pyramid. Their example of a more complex object was printing a key for a lock, so when they tested that shape, they were able to reproduce it with 92% accuracy. That seems pretty high, especially when you consider it’s interpreting those sounds and they could get that. To me, this is fascinating.

What they are suggesting is that if you have extensive intellectual property that you are 3D printing and you are concerned about that kind of vulnerability, then you should mask the sound of your 3D printer. You could also pipe music right over the 3D printer area as a quick solution too.

It reminds me of our primary 3D printer which is a MakerBot 5th Generation machine, and that printer is actually programmed with sounds that have nothing to do with the motors. Initially it drove me nuts, but then they finally came out with a way to turn it off and I’ve never gone back to turn it on. Maybe it’s better security for my prints to have the sounds on, but I get tired of listening to these R2D2 sounds all day long. Sometimes I swear I hear it at night even when I know the printer is not running, maybe my brain is duplicating it – like phantom vibrations from your cell phone when you think it’s ringing on vibrate in your pocket but it’s not receiving any calls or texts or it’s not even in my pocket. Phantom 3D print sound syndrome… hmm.

This has got me thinking about other vulnerabilities with 3D printers, especially a lot of these open sourced 3D printers. I would think even the closed systems are vulnerable. They are all connected to wifi networks, and a lot of them are wifi, or they use the Raspberry Pi board, and have common architecture, and many of them have cameras on the 3D printer. I was thinking about that and remembering a lot of the 3D printer reviews that we’ve done, and so many of them have a camera, an app, or even just through the cloud where can see on another computer or from your smart phone how your print is doing. Take for example all the latest news about hacking of the baby monitors like nanny cam, things like this are possible.

That to me is a bigger concern in terms of vulnerability and a security risk of 3D printers than this type of ultra cool, old school meets new school with the audio recording being able to reproduce that type of geometry, but the camera to me is the real threat and concern. Especially when you have kids in the house, and a lot of them are facing outwards so they are showing what’s in the room. We usually turn the cameras around the other way, and actually just use our own GoPro whether it’s our printer or a test printer. They are connected via wifi so I’m sure they are vulnerable to a degree, but I definitely place that in a way where you can really only see the build plate and tools on the wall behind it.

We did do the Polar 3D printer review, and I really admire and like that printer and recommend it as a starter printer or for students. It’s got a lot of safety features and relatively few parts so it’s super easy to use. The one thing that I was concerned about is that the camera faces out towards to room and there’s no enclosure at all, which was what I thought was a nice thing about it because you can see what’s going if a bunch of kids were all crowding about it. That’s the good part, the bad part is that I remember looking over the cloud on the app and the camera was going right into our home office environment. You could see everything, people walking up the stairs, see into our offices, and it was pretty eye opening. If somebody hacked that, then they would have a window into our home.

If you’ve got a printer like that, what we do with ours and some others, is that you actually can just put a sheet or a pillow case as a backdrop so that if you do want to make a time-lapse the light quality won’t change if someones shadow passes by. I think it’s a good point to really consider the environment or location that your printer is in if it’s your home or a classroom setting. So many 3D printers have cameras now, so you really want to think about what does that camera see, and maybe reconsider it’s location.

The one thing that I really like about this article is it mentioned countermeasures, like the one before about creating some white noise with music, but the one I liked was they mentioned using a unique signature made up of quantum dots. Those are particles that only visible in UV light so that you would know you got a legitimate part, so like in our case a Hazz Design made part that was bought directly from us and it wasn’t a counterfeit product. We’ve done things like this before where we put our own marks inside, not quite like that, but like a little signature. Our purposes for doing that with our Asian products is to make sure that someone isn’t actually physically using the tool that we or our clients paid for to make counterfeit parts which would be an even greater theft and violation at the factory level. We do that kind of embedding within that, but this would take it a step further to make sure you are getting products made by the source because the only way to get rid of that quantum dot embedding is to destroy the product. 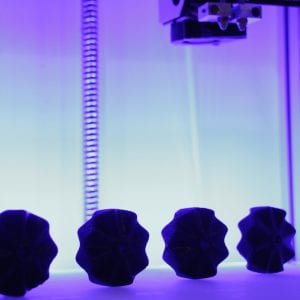 Didn’t use quantum dots for these parts we 3D printed, but it’s a step in the right direction to embed a signature of sorts to prove legitimacy of print.

This quantum dot embedding, which I don’t fully understand and will have to look more into, but it’s really cool and this is all really important. I think that in this world, it’s not so much that your stuff is being taken and reprinted somewhere, but if it’s taken and reprinted in a counterfeit situation and you get sued due to some liability like it breaking because it wasn’t made properly and was an unauthorized reproduction of your design, that’s really critically important. You would have to be able to identify that you did not print that and that you did not make that and it wasn’t your original design because your original design had a certain mark inside of it.

It’s going to be a bigger issue in the years to come when we really get to more of a consumer level of people 3D printing things, selling them on Etsy, or having a retail store, or contract with a service bureau to print them. I can definitely see there being some very popular designs and models out there that are selling a great deal, and somebody’s going to want to copy them because that’s just the way things go. The liability aspect is going to be a bigger issue, so it’s going to be a good thing to be able to identify if the 3D printed product was produced by the person being accused of not producing a quality product or not.

Check back Wednesday for a big announcement on how you can get one of our designs for free. If you have any thoughts on 3D print spying or security issues, be sure to leave a comment or share your thoughts and experiences below in the comments section.