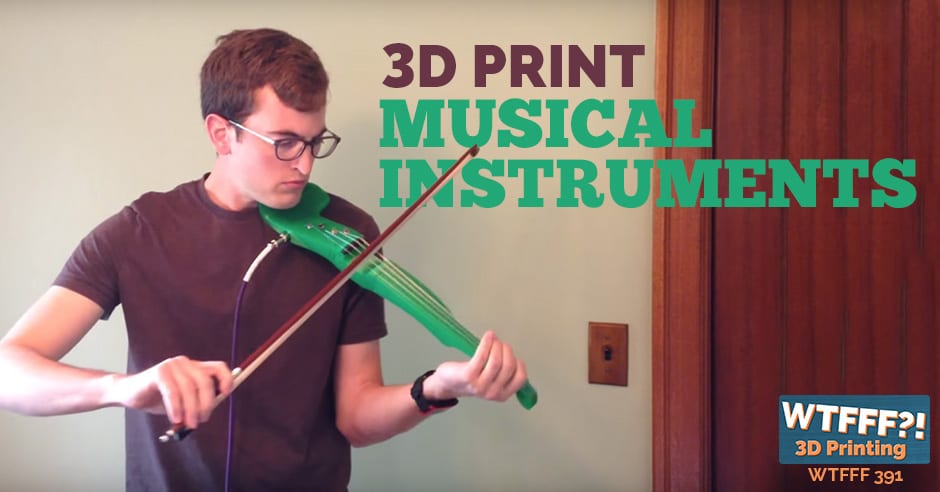 3D Print musical instruments not only provide great sound, but provide a more affordable alternative to schools trying to keep expensive music programs in place. In a practical way, creating 3D print musical instruments provides students with the opportunity to be involved with the creation and building (through a kit) of their very own recorder, guitar, violin, or to design an instrument that has yet to be 3D printed.

Yesterday when we were talking about weighted and balanced 3D prints and stability issues, we got this idea that we could put different types of materials inside of it, like ball bearings and other things like that, that might make sounds. Like those rain sticks that are so popular. It got us thinking about other kinds of things that make music, musical 3D prints and actual 3D print musical instruments.

I think that there are a lot of very practical ways, even in a relatively simple project, that you could make a 3D print, all the way up to instruments that would be much more complex. A lot of these 3D print musical instruments that we found on the internet and other places that we’ve seen them out in trade shows and other things are printed in many pieces. Keep that in mind as we talk about this.

Even though the instruments sound big, it’s obviously printed in parts and assembled together. Many of them are kits or involve off the shelf parts or other things. You make a 3D print violin, which we’re going to talk about in a minute, you’ve got to have some real strings there among other things. Some real strings and some other parts that are necessary.

Let’s start with the potential home projects or easier projects, because all of us in elementary school had to suffer through, I’m afraid, the same kind of musical lessons. No, we’re going to talk about the recorder, which comes next year for Lannea, by the ways. Third grade, if I remember right. Can we skip that grade? Having to listen to that everyday for months on end, it’s just excruciating at times.

I know it wasn’t horribly expensive. It’s like $30 or $40 for us to rent this thing. I don’t even think we bought it. I think we rented it or something like that. I don’t remember. We got rid of Alex’s a long time ago so I’m sure we don’t have that anymore. We’ll have to get another one. The thing is, it’s like you pay that money to torture your parents, to torture yourself.

I prefer to really get a little something more meaningful out of the experience and actually look at 3D printing a recorder. Maybe it would have to be printed in two parts and join in the middle just because of its height, or three. Most 3D printers, I bet two parts could do it. Nominally, cylindrical 3D prints, even though another profile will change over the course of the model, are really relatively easy and stable parts to print.

The interior structure, if you had a cross section view of everything that has to happen with where you blow into it in order for it to create the right tones, I think you really could do it. I don’t know. It would be really interesting. Then certainly, we’d be able to combine science and music, math, and music. I love that. I think that that’s a really great thing.

One of the things that this got us thinking about was, is this really cost effective to be printing musical instruments and other things like that? Because we have a good friend whose daughter, very entrepreneurial young daughter, has raised awareness for something I didn’t know was such a big problem. Hannah’s Musical Hope is what it’s called. Music in classrooms and musical instruments are extremely expensive, so it’s actually declining across the country.

There are lots of schools that just can’t afford to buy new instruments to supply for their students to learn on or for even the ones that want to learn. This becomes a real challenge. She has this non profit organization she started. She’s barely a teenager I think. I think she’s fourteen or fifteen. She started this non profit organization, taking donations of used instruments that they can then redistribute to schools in need. That’s a wonderful organization. We’ve actually donated an instrument to her organization that we were no longer using.

I like this idea of, could 3D printing make more instruments available to people that otherwise might not be able to buy them? Or let’s say that even if you could, what about repair parts or be able to replace some parts. All sorts of opportunities there, I would think.’

We found a project out there on the internet which really represents what can be done. It’s a FFFiddle. They call it the FFFiddle. Anyway, it’s an FFF printed violin essentially. It’s electric violin. Much like an electric guitar would be. It’s got couple of pickups in it. You’re not creating a resonance chamber like a traditional wood violin.

We’ve talked about these issues and about whether or not, how to do that. When we talked about our guitar, we had a podcast not too long ago about a guitar, about 3D printing guitars. We talked a little bit about the possibility of it being acoustic chambers and things like that. For the most part, they were electric.

I was a mess. I had to have this special dental work to try to fix what happened. Because of that, I couldn’t play an instrument where I had to blow. I had a wind instrument disability. I really wanted to do it. The only option to me was to play the violin. I can tell you, after the first darn day of carrying that instrument to school, I wanted to chuck it and give it up. If I didn’t fulfill the year, my parents would’ve killed me.

This is why I never went past fourth grade, because carrying the instrument and holding it up was extremely hard when you’re a tiny little fourth grade girl. The FF Fiddle could’ve helped out with that. That’s what I was thinking. Because this thing is considerably lean and mean in terms of physical size. Plus, it could be cooler. It could’ve been hot pink. It could’ve been any color. It would’ve been girly and more cool. I would’ve felt better doing it instead of geeky doing it in the fourth grade. I could not wait for that year to be over by the way, and I also discovered that I didn’t have very good musical timing. It was definitely not my forte. I never have good timing anyway. I’m always late for every meeting we have.

Anyway, this project is really cool. The website is OpenFabPDX. Pretty cool. His name is David Perry. It’s just such a really cool thing. It’s not the cheapest thing ever, but renting or purchasing violins is very expensive. This has got to be cheaper than that. Because there’s pickups and some other things you have to buy, the kit itself gets a little … A couple hundred dollars by the time you’re done with it.

He has the assembly instructions in a PDF. He’s got all of the STL files available on his site. You can download these for free. This is an opensource, he’s sharing it with everybody. If you want to do the project yourself, you can even print all the parts and do all that yourself. They also have kits of the electric parts, because it’s going to be an electric violin. Or you can even buy the printed parts kit if you don’t want to print them yourselves or if you don’t have your own 3D printer yet. You can even buy the entire full kit and make it a project to put it together yourself. They’ll sell you all the parts.

This is not a commercial for them, we just found this project. We thought it was so cool. We thought it was really cool. I’m sure he doesn’t sell a whole lot of them. By all means, if you’re interested, go there and please buy it. There’s a really cool video of him demonstrating it and talking about it above, but we also saw this 3D printed acoustic violin video.

Another thing that I was thinking about is there’s this problem and there’s a reason why you rent violins when you’re a child. It’s because you grow and the size of the violin has to change. You could just print a different one and still be able to use all of the interior parts again. That’s a really cool idea. Or just a portion of it you have to print.

You’ll have to go see this video to see the explanation and see how it goes together, and hear it. It sounds beautiful. The violin is built in a few different parts. If you needed a longer neck, you could go and make that longer in the future. Or if you needed the different part that engages with your chin and your shoulder, you need to make it a little larger as you grow older, then you could replace that part.

FFFiddle bridge is made of Proto-Pasta filament

One interesting thing that he did there that I wanted to point out is that he used that Proto-pasta carbon fiber on the bridge section, which is a very structurally critical part of the violin. He printed the whole thing on a MakerBot Replicator 2, which was impressive.

We hear a lot of people have these old Replicator 2s and love them. They’re work horses. They’re doing whatever they can to keep them going because they do a really good job I guess. I’ve never used one myself.

At this time of year, you might be thinking that, as we get closer to New Year’s or the holidays, that you want to be cleaning out your closets and you find these old instruments, please put them to a good home and help out in that way at minimum.

We’ll have information on Hannah’s Musical Hope. It’s not 3D print related at all but just a really good charitable organization that if you have leftover instruments, boy, they could use them. All you got to do is ship it to them. You can deduct that off your taxes for donating it to a charitable organization.

She’s such an enterprising young lady. She applied and got her own 501C3. I’m super impressed about her. She has a business plan and everything. She’s amazed me. If you guys have made any instruments, especially if anyone made a recorder, we totally want to see that. Please send us a message on Instagram, Facebook, Pinterest, wherever @3DStartPoint.

That was fun. A short dive into musical instruments, 3D print musical instruments. It’s really cool. Hopefully, we’ll find some others. If we find enough, we’ll do another show at some point on them. Very cool stuff. I’m inspired, I hope you are too.