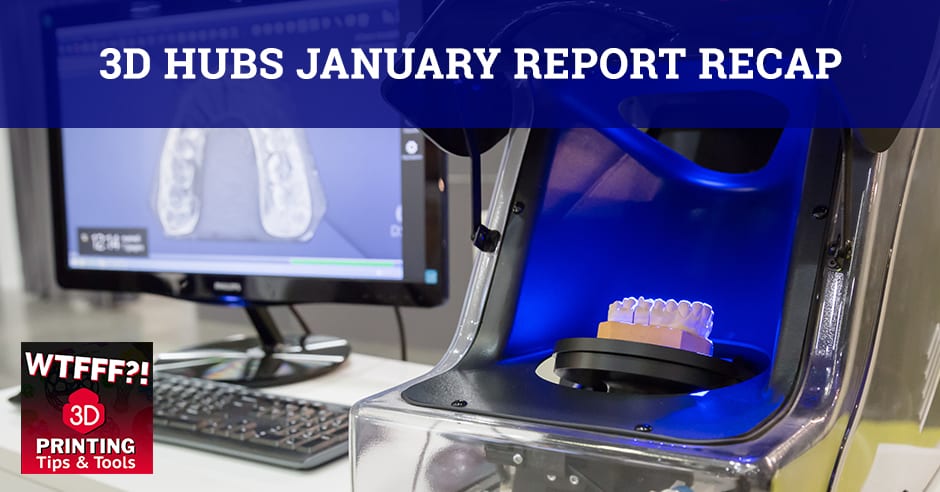 If you’re in the 3D print industry but are not familiar with 3D Hubs, it’s high time to learn. 3D Hubs is a company that releases a report that covers recent trends in the manufacturing industry based on data from thousands of active international suppliers. This report includes print quality ratings, 3D printer model popularity, print categories, most used CNC and 3D printing materials, color choices, and demographics. In this episode, Tom and Tracy Hazzard talk about the report released in January 2016, discussing the highlights of the report and its usefulness in the industry. They also go in-depth into how the data is gathered and how it can be used.

We’ve got a discussion regarding the monthly installment of the 3D Hubs report.

They call it the January report, but it’s the post from December.

It’s information from December but it’s published in January. I would call it the December report, but they call it the January report.

Three of the industrial printers are more Nylon, PolyJet and full-color Sandstone, which are those expensive commercial printers that do full-color printing.

In our experience, the reason why that’s probably the most popular there is the price of the actual print tends to be cheaper. Whenever we’ve posted up something into Shapeways, i.materialise or any of those places, the Sandstone cost is always the cheapest. It’s somebody who’s trying to test it. If you’re going to test it, you might as well test on the cheapest printer or material possible before you go further. That could be part of the reason.

Surprisingly, the least ordered material is PLA in 3D Hubs.

It’s behind ABS and Resin.

The ABS is second to the last. The FFF printers are not printing as much, it seems. It’s only a few hubs.

This is an average order value. It means that they’re not the most expensive.

They’re the cheapest. It’s not necessarily the least quantity.

It’s been our experience of the industrial ones. It looks like here that Nylon is their cheaper one.

Also, it depends on how parts are being done. I know with Shapeways, they’re getting lots of orders and gaining a whole bunch of parts on their platform at once and dividing that cost among all the jobs. That so may be a different situation. There may be some caveats in this pricing reality. It’s like what we’ve learned from Pet Prints 3D when they ran everything at once. The cost is not necessarily high per part.

The other interesting thing about the report is that when they go through the FDM or FFF desktop printers, it’s like, “I swear, I don’t know half of those printers on that list.”

There are so many of them.

Have you ever heard of Velleman?

I’ve seen the name before, but I’ve certainly have not experienced the printer.

There are so many random printers. I know granted that 3D Hubs is worldwide, so they have a bigger European audience and other things that you would expect. It’s not only US-based. We’ve heard of the Printrbot, the FlashForge and MakerBot. MakerBot is still the top printer requested. They’ve got the Delta WASP and some other things in here. There’s a lot of movement on the list, which is interesting. Every month there are a lot of shifts in the list. Form 1 was up at number seven or something that and it was down at number eighteen, so it’s shifted.

The way 3D Hubs works, it’s not one centralized organization. They’re decentralized and it’s depending on these independent entrepreneurs who are a part of this. There naturally can be a lot of fluctuation from month to month.

It’s based on reviews. It’s who’s reviewed it the most and who’s gotten a higher rating and things like that.

3D Hubs Report: If you are somebody who’s inclined to join a 3D hub and you own your own 3D printer, you can; that’s the only requirement.

In December, who’s gone on vacation to visit family for ten days and shuts it down for a while?

Evidently, it’s all the MakerBot users because it’s down at the bottom. We find that some part of this is useful but it’s more of the data geek in us that like it. At the same time, we find it not substantial enough yet because it is so relative to the holiday or whoever happens to be more active in any given month. Maybe there are more projects than in one area and things like that. That’s interesting. For instance, on the trending printers, Form 2 has 133% month over month growth because it got on the list and people just got them.

It’s a new printer. With the trending printers, I don’t know what that means. The Dremel Idea Builder is on the Trending Printer list at almost 11%. It’s the growth of how many models have entered their platform is what that means. I don’t know if that’s a significant stat. There’s a lot of that here. We’ve talked about it before and here we are talking about it. We need to keep looking at it for a couple more months and determine, is there a lot of real value here for our readers and for us to be paying significant attention to this? Is it only data that is showing you who’s joined lately and what people have been buying last month compared to the month before? Is that meaningful? Does it help us?

That’s the thing is and this happens all the time when we do our market research studies and things like that and we do a market analysis for our clients. We look at data that and we are a big data geek about this. I like the data, but the problem is sometimes it’s too short a time frame. You’re getting two months of the monthly fluctuations and you’re interpreting that data badly because of it. The reality is we need to look at it year over year.

That may be and that would be a lot more telling. I do like seeing the top prints cities and wondering how that’s changing over time. The top two cities are in fact, US cities. New York and Los Angeles, followed by London. It surprised us. I was expecting to see the Netherlands and here which they’re not until number six is Amsterdam. You have a lot more in the middle there. European cities and back to Chicago, Boston, Toronto and San Francisco. The top print cities of people that are in 3D Hubs are primarily US and European-based. I don’t see South America and Asia on there.

What is this data, though? Does it say here because it has how many 3D printing locations they have? That could be a good recruiter.

It could be and it doesn’t tell you about sell-through and purchases. It only tells you about the number of people in the hub and who is available. If you’re in one of those cities and you’re not printing your stuff, you have a lot more options available to you for outsources. That’s a good thing. It doesn’t tell you how good they are.

It doesn’t tell you how many dollars does this city generates. That would be much more interesting. Maybe it doesn’t work that way. Maybe there’s not a self-reporting structure within 3D Hubs. I don’t know because we’re not on the hub.

If they know about the order value per material, they have to have some information on sales. It’d be nice to understand where the biggest sales are coming from. Is it still those same big cities or are those where a lot of techies happened to be that have decided to become entrepreneurial and join the hub?

The one interesting thing that you should probably check out and go to click through on the 3D Hubs report is that there’s a push that they’re making to doing 3D print events around the globe and they’ve got a calendar of those events. This is interesting because what they’re doing is for instance, on January 7, they had a CES meetup, so they had one there. They have one in Melbourne. New York did one that got the most out of your 3D printer. Both a recruiting method as well as an informational meeting and so these internal events that they’re running is to gain a broader audience. I don’t think they’re getting a lot of clients there. They’re probably getting a lot of hubs there.

They can all learn from each other and share their experiences. If you are somebody who’s inclined to join a 3D Hub and if you own a 3D printer, you can. That’s the only requirement. You have to be somebody who prints things and is willing to print things for others on contract. I would think you’d want to get involved in this organization.

You make your printer make money.

You learn from others what are the best practices and what people had success with and what have they not. This community is cooperative and helpful in the spirit of open source and all that. I would take advantage of that if that was our gig.

We thought we’d bring this to you as we’ve been doing. I’d love to hear if you find it useful, so we can decide whether we’re going to do it month over month or maybe we’ll do it once every six months instead. We think we should have Brian Garret who does the analysis and puts out. We should have him on the podcast. Let’s send an invitation to him.

I’ve heard through some common associations that we have that he knows of the podcast and wants to be a guest. We haven’t been able to work out the schedule yet. We need to make that a bigger priority because maybe we can get it directly from them. What does this report intend? I hate to have Ask Us Anything on the 3D Hubs report and leave us with an open-ended question of, “How is this useful to us?” Let us know what you think if you guys don’t want to hear this and you’d rather hear other topics. We’ll leave it be until we get more significant data.

You can’t hear it from the news because you don’t have the time. You want us to tell you about the report or what the details are. We’re happy to do it.

If you want to hear it straight from 3D Hubs, we’ll invite them on. We can do it regularly if that’s the case, too. If you’re interested in that.

We could get them to come out regularly.

There you go. We offer that up. If you want to tell us what you think you can find us anywhere on social media at @HazzDesign.

You can come on our website 3DStartPoint.com or WTFFFPodcast.com and you can send us an email info at either of those two domains.